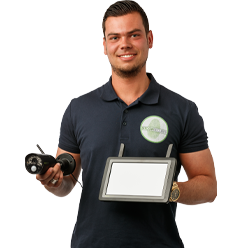 This SMART scare lamp camera set comes complete with recorder, 4 scare lamp cameras, cables and accessories so that you do not need anything else. This user-friendly camera system can be placed both indoors and outdoors and has useful functions such as live viewing from your smartphone and two-way audio.

How does the SMART flashlight camera system work ?:
The recorder is the focal point in the setup of this system. For example, the UTP cables run from the recorder to the cameras, a network cable to your router and optionally an HDMI cable to your TV or monitor. A hard disk is built into the recorder where the images are stored continuously or during movement.

Scare lamp function:
This camera is equipped with 2 high power LEDS which can be set via the recorder to, for example, switch on during movement between certain times. This creates a shock lamp effect while of course recording simultaneously. Besides the times of this function, other things such as the intensity can also be set in the recorder. These High power LEDs work independently of the normal night vision LEDs, so even when they are not on, you have a clear image of up to 20 meters at night.

Two-way audio:
The scare lamp camera is equipped with both a microphone and speaker and can therefore emit an alarm signal when there is movement, but you can also use the smartphone APP to communicate with the person near the camera.

Power over Ethernet (POE):
The camera supports power over ethernet (POE) and can therefore be connected directly to the recorder with the supplied UTP network cable. The recorder has a built-in POE switch which provides the cameras with direct power and whereby the image and possibly sound also run via the same cable.

Motion Detection and Recording:
The recorder with 4 channels comes with a hard disk and is set as standard to record during movement. With 4 cameras, it takes an average of up to a month before the hard disk fills up. When this happens, the oldest images will be automatically overwritten.