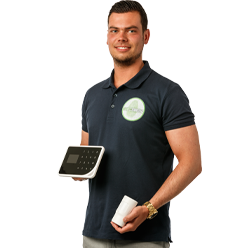 How does the PIR Solar line driveway indicator work:
The motion detector can be placed outdoors or indoors at a distance of up to 200 meters from the wireless receiver. The motion detector is supplied with mounting screws and adjustable base for positioning at the correct angle.

Operation PIR motion detector Solar line:
The detection distance of this PIR sensor is up to 15 meters depending on the installation angle and set sensitivity. The PIR sensor comes with a flexible bracket which makes it easy to adjust. The detection angle with this product is set very narrow at 15 degrees so that it can be seen as it were as a beam that must be broken before the sensor sees it as movement. This reduces the risk of false alarms.

Operation of the battery and solar panel:
The PIR motion detector has a solar panel which charges the built-in battery when there is sufficient sunlight. For proper operation, the solar panel must get enough light. In less light conditions, the motion detector's battery may need to be periodically recharged. We supply a 12 volt adapter for this, so that you can do this yourself when necessary.

Install extra sensors and receivers.
This motion alarm can be expanded with additional receivers and detectors. For example, you can place a motion detector near your front and back garden. The other way around is also possible with an extra receiver. for example, you can place an extra wireless receiver in your garage so that you also receive notifications in case of movement there. All sensors from the PLUS line are compatible with this system.

Optionally connectable to existing alarm system:
If you wish to connect this visitor detector to an existing alarm system, this cannot be done wirelessly. This is because this driveway indicator transmits on a specially tuned frequency. However, it is possible to use the wireless relays which can be ordered with this product under the heading accessories. The wireless relay then works as an extra receiver and is then wired to connect to a free alarm port of the alarm system. When the sensor gives a message, this will also be passed on to the alarm system.

Base station features:
- Link up to 32 sensors
- Can be placed horizontally or on a wall
- Volume and signal can be set
- Operates on a 5 volt 1.5 ampere adapter
- 433 Mhz FSK + FHSS
- Possibility to place 4 AA batteries for battery use