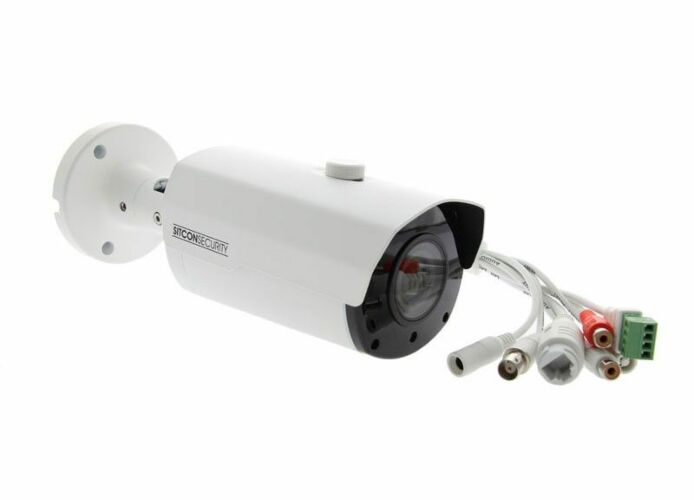 Motorized lens of 4K Ultra HD (UTP) IR + Bullet camera:
The motorized lens of the 4K Ultra HD camera makes it possible to zoom via the recorder, but also from the APP. Due to the auto focus, the image is immediately focused and you have between 31 and 103 degrees zoom range.

New generation night vision 4K Ultra HD (UTP) IR + Bullet camera:
By using the new generation of SMT IR LEDs and a special 'Starlight' light-sensitive lens, a superior night vision is made possible. This light-sensitive Starlight lens can film in color much longer in low light than is possible with a conventional security camera. The images are as clear in the dark as during the day and up to 50 meters night vision is possible thanks to the strong SMT LEDs.

Power over Ethernet 4K Ultra HD (UTP) IR + Bullet camera:
The 4K Ultra HD camera supports power over ethernet (POE) and can therefore be connected directly to our UTP HD recorders with a UTP network cable. The UTP HD recorders have a built-in POE switch which supplies the UTP HD cameras directly with power and where the image and possibly sound also run via the same cable.

Optional: SD card recording 4K Ultra HD (UTP) IR + Bullet camera:
A micro SD card up to 64 GB can be inserted in the 4K Ultra HD HD camera. This makes it possible to also save images in the camera itself. This increases the safety of the system when the HD recorder may be taken or damaged. However, this is already overcome by the built-in Dropbox Cloud storage in the HD recorder, which means that it will not be necessary for most people to also insert an SD card.

No questions yet. Be the first to ask the question!
Accessories: 4K HD (UTP) - Bullet camera (wireless)