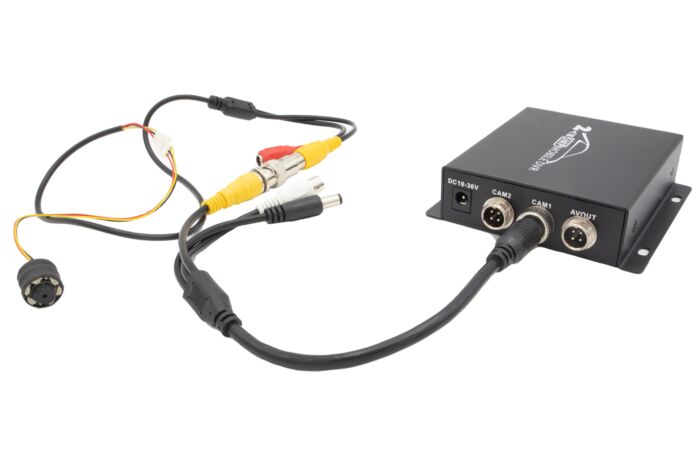 The mini infrared spy camera set consists of a super small IR security camera with invisible IR LEDs and an SD camera recorder. The spycamera lens also has professional specifications, such as 520 TV lines, 0 lux for filming in total dark spaces and a weight of only 3 grams. The SD video recorder is a silent recording device because it records the video images on an SD card (not included) instead of a hard disk.

850 nm IR VS 940 nm IR:
We have 2 mini spy cameras in the range that have the same model only of which this model has 940 nm IR leds and the other version 850 nm IR leds. The difference between these values is that this mini spy camera has up to 2 meters night vision in the dark, but the IR LEDs do not light up and are therefore not visible in the thunder. The model with 850 nm IR LEDs has up to 5 meters of night vision, but the IR LEDs light up and give a visible red glow in the dark. Both mini spy cameras cannot be placed behind glass because this will reflect in the dark.

Motion detection:
The SD card video recorder can record the video images on an SD card on the move. When motion is detected, the sd recorder will immediately start filming and record the images on the SD card.

32 GB support:
The SDR does not include an SD card, but you can use up to a 32 GB SD card, with which you can film between 24 and 404 hours depending on the chosen settings.

Both the area where motion is to be detected and the sensitivity of the detection can be accurately adjusted. In addition, this DVR has loop recording, which means that the DVR can be set to overwrite the oldest images as soon as the card is full.

Play recorded videos:
The video recordings can be easily watched back on TV by connecting the DVR with the supplied cable. Furthermore, it is possible to view the video images directly from the SD card on the computer. This mini SD video recorder works great with all wireless and wired cameras and is easy to install and operate

No questions yet. Be the first to ask the question!
Accessories: Mini infrared spycam set + SD recorder