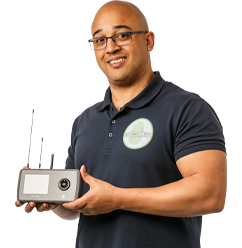 How the Thermal Imager works:
The thermal imaging camera has a special thermal lens that makes it possible to observe the temperature differences in a room. The thermal camera is a very user-friendly product that is easy to operate with the 3 buttons. There is a focus point in the image that you can point at an object to measure its temperature.

Internal Memory Thermal Imager:
With the thermal imaging camera it is possible to take screenshots of the image you are filming. The thermal camera has an internal memory for up to 500 screenshots, which you can view on the camera itself or copy it to a laptop or PC to keep it as evidence.

Detecting (insulation) leaks:
The thermal imaging camera is widely used for detecting extreme heat sources in a house or shed. When you aim at a house / shed from the outside with this thermal camera, you will see exactly a heat source if it is not properly insulated. This camera is therefore widely used for detecting hemp plantations, they are found as easily as they are not well isolated.